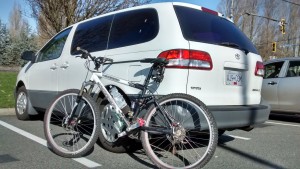 As I had planned, I left Nanaimo and went on the Mainland on Saturday, January 31 to look for a van. That same day, I tried two and saw a third one which I couldn’t try right away because it didn’t have any insurance.

Buying a vehicle is interesting. It seems like the interaction with the person from who you buy is also part of the deal. The first van I tried looked like a super deal. A Sienna 2001 with only 105 000 km. The motor was so clean. It looked brand new. Almost too good to be true. The counterpart came quickly when I was told that the road test could only happen within the boundaries of the Mall parking lot where we met. On top of that, it is with great hesitation that the owner answered ‘oh heuuuu, around two or three years’ when I asked for how long he’s been owning the vehicle. But my experience dealing with the owners was progressively getting better. At the end of the day, I was almost ready to buy the third van, the one I haven’t tried. It was a Sienna 2000 XLE, the top model. The motor has been changed. The new one had apparently 139 000 km on it. Belts were all new. The asking price seemed fair. The van was clean and rust free and the remarkably friendly owner made the shopping quite interesting. A road test would be the next step then the inspection by a mechanic and there we go… I have a van. So, I slept on this idea.

There is an expression in French that I like and it happened to be true several times: ‘La nuit porte conseil’. Literally you would say ‘The night (or a good sleep at night) brings you advices’. Waking up the next morning, I had this little doubt growing in my mind. Despite the fact that the motor had low mileage and the van was rust free, the body itself had quite a bit of mileage (over 350 000 km). I kept thinking about a transmission failure that could occur anytime. Also, the idea of having everything electric (sliding door and sunroof included), as it was the XLE model, was not so appealing to me. I like simple things. The second van I tried suddenly became my first choice but I had the feeling that I should try at least one more so I could have something to compare with and see if the asking price was fair.

On Sunday, I looked at the fourth van. Nice people… but the van wasn’t as nice as them and as you could read in the ad. So, on Monday I decided to go back and have a second look at what became my first choice, a white Sienna CE 2002, the basic model. I would’ve liked to have the roof rack but figured that I could deal with that later. I made an offer, we discussed a bit and finally sealed a deal. I got it checked by a mechanic that same day. The next evening, I was leaving the Mainland with the van that, hopefully, would help me travel trouble free into the next chapter: visiting, swimming and camping on the Canadian West Coast in search of great swimming spots in the Salish Sea.